I’ll Be Home for Christmas, by The Library of Congress
True Christmas Stories From the Heart of Appalachia, compilation published by JSF in 2019
Appalachian Christmas Stories, JSF published
Snow Day, by Billy Coffey
The Christmas Quilt, by Thomas J. Davis
The Beatinest Boy, by Jesse Stuart
Missing Christmas, by Jack D. Ellis
Christmas Day in the Morning, by Pearl S. Buck, illustrated by Mark Buehner 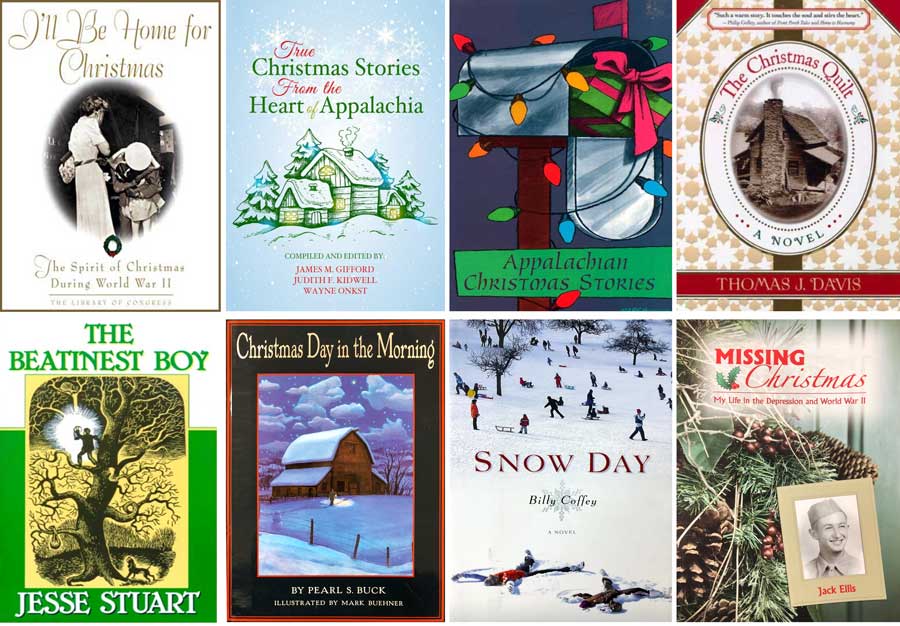 I’ll Be Home for Christmas, by The Library of Congress

America is ready to remember and honor the men and women who courageously served the nation during World War II. To celebrate those brave souls and their families, and the spirit that carried them through our nation’s darkest days, the Library of Congress has created a magnificent gift book.

Themed around memories of Christmas during the war, I’ll Be Home for Christmas: The Spirit of Christmas During World War II is a unique and handsomely packaged collection of poignant stories, correspondence, more than 100 photographs and illustrations, and diary excerpts from those who went off to war and those who kept the home fires burning.

True Christmas Stories From the Heart of Appalachia, compilation published by JSF in 2019

This Jesse Stuart Foundation publishing captures the spirit of Christmas in 43 true stories by 39 authors. Thirty-five of the stories are set in Kentucky and the others are from neighboring states. All of these powerful and well-written stories emanate from the heart of Appalachia, and many attach themselves to your heart. This is a great Christmas gift book!

A Collection of essays, short stories, and poetry from writers, including Jesse Stuart, Billy C. Clark, James B. Goode, and Thomas D. Clark.

In this novel, Peter is a simple man who lives by a simple truth — a person gains strength by leaning on his constants. To him, those constants are the factory where he works, the family he loves, and the God who sustains him. But when news of job cuts comes against the backdrop of an unexpected snowstorm, his life becomes filled with far more doubts than certainties.

A nostalgic holiday story follows seven months in the lives of a farming family in the mountains of north Georgia as they share family dinners, berry pickings, revival meetings, and a grandmother’s quilting work for an absent son.

The Beatinest Boy, by Jesse Stuart

Grandma Beverley s fond of saying that David is the “beatinest” boy who ever grew up in the valley. And David is sure that his grandmother is the smartest, most wonderful women in the world. This book sis the story out of Jesse’s Stuart’s native Appalachian Kentucky, about people he knew best. His story has the richness and beauty of golden honey made from autumn flowers.

Following World War I, our nation entered a decade of national prosperity. Businesses flourished, and the standard of living rose. Jobs were plentiful and Americans were better fed, clothed, and housed than they had ever been before. However, the prosperity of the roaring twenties did not filter down to the rural poor of Appalachia.

Christmas Day in the Morning, by Pearl S. Buck, illustrated by Mark Buehner

Rob wants to get his father something special for Christmas this year — something that shows how much he really loves him. But it’s Christmas Eve, and he doesn’t have much money to spend. What could he possibly get? Suddenly, Rob thinks of the best gift of all…

The acclaimed author of nearly a hundred books for children and adults, Pearl S. Buck captures the spirit of Christmas in this elegant, heartening story about a boy’s gift of love. Originally published in 1955, this timeless story with glorious full-color art by Mark Buehner will be a welcome addition to your holiday collection.